The Romantics to Rodin

The Daniel Katz Gallery is delighted to be staging The Romantics to Rodin, an exhibition to mark London Art Week 2017. The show derives from a seminal exhibition of the same name held at the LA County Museum in 1980 that charted the remarkable development of the sculptural medium in 19th century France. It seems a highly pertinent time to revisit this study, in this Rodin’s centenary year, and the gallery will put on display a fascinating body of material that illustrates the journey from early Romanticism at the beginning of the century through to a mature Rodin at its conclusion. The 19th century in France marked an extremely exciting moment in the evolution of the three dimensional medium. Sculpture offered artists ways to find artistic expression that was no longer synchronized to the developments in painting. They did this through using a mixture of new materials, subject matter and taking influence from outside of the traditional classical sphere. The exhibition begins at the very dawn of Romanticism with a sculptural maquette for Gericault’s pivotal and iconic Romantic painting, The Raft of the Medusa in 1819. Here the artist adopts the unusual practice of using plastic art to formalize the composition of a painting, while producing a work still dramatic and beautiful in its own right. Auguste Préault's haunting Silence roundel, stylised, macabre, and starkly constrained within a perfect circle, at once recalls Michelangelo's strength of modeling and yet anticipates the symbolists at the end of the century. With Barye and Frémiet we are offered a wholly new and refreshing subject matter. Barye’s large-scale plaster model, delicately coated and worked in a layer of wax, seemingly breathes before our eyes. It is a depiction of a powerful beast, caught unawares, but not used as a prop or for symbolic function but as a stunningly worthy subject in its own right, the fruit of days spent sketching at the zoo in Paris with Delacroix. Frémiet startles us with his gruesome and shocking Gorilla abducting a gladiator - it caused a sensation in its day - alarming an academic, old-fashioned Salon with its daring, brilliant modelling. The subject absorbs Charles Darwin’s recently published Origin of Species, as the sculpture communicates to the viewer the idea of nature reclaiming its primacy over man. Gustave Doré with his Acrobats almost literally turns traditional subject matter and contrapposto on its head. The viewer is left feeling vertiginous as his pyramid of acrobats dizzyingly towers above them in an at once anarchic and perfectly balanced mass of human form. Jean Carriès, inspired by new materials brought to France from Japan at the universal Exhibition in 1878 in Paris, playfully informs us of the new possibilities of sculptural surface, texture and mood with his enamelled stoneware and painted plaster. His Self-portrait mask shows his passionate experimentation with pigments and patinas, as his mask marries decorative elements to strong sculptural design. Ultimately we arrive at Rodin, the bridge to Modern Sculpture at the end of the century. His iconic Eve, once owned by Kenneth Clarke, depicts the psychological moment of Eve’s revelation. Designed for his monumental portal, the Gates of Hell, he manages to portray, in bronze, the mother of humanity sheltering herself in her own embrace - the end of innocence. With Rodin, material becomes subject itself, and he sets in motion the possibilities for an entirely new sculptural vocabulary, as 20th century Paris became the hotbed for an expanded sculptural field and a new generation of possibilities as taken up by the Avant-garde. 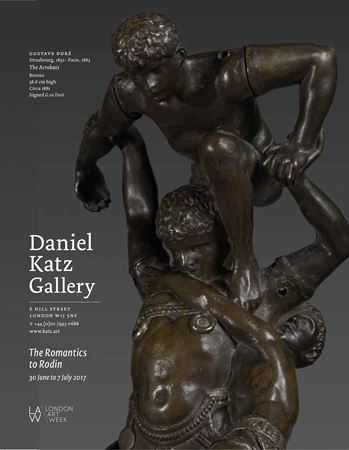