The Shape of Things: Three Decades of British Modernist Sculpture

Daniel Katz is pleased to be staging an exhibition of Modernist British sculpture spanning three decades from 1930 to 1960.

The twentieth century presented something genuinely new in British Art; successive generations of British sculptors were working at a consistently high level of achievement. They were also internationally recognized for doing so. Radical, experimental and constantly looking to move forward, the sculptors in Britain during the twentieth century and the sculptures they made offer an incredible perspective on how this most ancient art form has reacted to its times and continually renewed itself. The sculptures in this show are drawn largely from the decades either side of World War II, including works by Moore, Hepworth, Chadwick and Paolozzi. The aim of the exhibition is to raise questions about the way in which British sculptors reacted to international modernist trends, the dislocation caused by the war and its aftermath, and the regeneration of international awareness that would lead to the point where the very basic tenets of sculpture would be questioned. “You see, I think a sculptor is a person who is interested in the shape of things. A poet is somebody who is interested in words; a musician is someone who is interested in ... sounds. But a sculptor is a person obsessed with the form and the shape of things, and it's not just the shape of any one thing, but the shape of anything and everything." (Henry Moore) Exhibition curator James Rawlin, independent scholar and former Senior Director of Modern and Post-War British Art at Sotheby’s has written an essay for the accompanying fully illustrated catalogue. 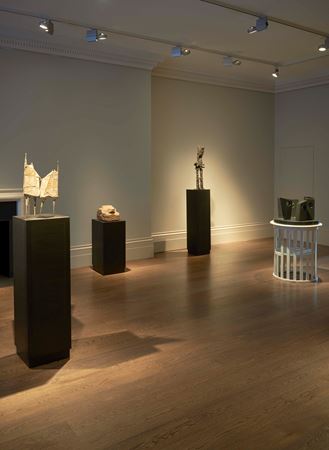