The Peculiarity of Algernon Newton

The Daniel Katz Gallery is pleased to be staging an exhibition of works by the painter Algernon Newton (1880-1968). The exhibition will feature sixteen paintings by this underappreciated artist, and is accompanied by a catalogue with an essay by Andrew Graham-Dixon.

The exhibition looks at Newton’s work from the 1930s and 40s which beneath the surface of pastoral landscapes carries undercurrents of anxiety and tension. Newton said of his own work “I tried to create something in every picture I painted, a mood, a mental atmosphere, a sentiment.” His vision at this point is personalised and strained by the tensions smothering Europe at the time and his paintings were the expression of his natural animosity to war and violence. In 1914 Newton volunteered for the army before being invalided out in 1916. Clearly very affected by The Great War he harboured strong pacifist feelings during the Second World War and expresses some of these elements in his paintings. His work in London depicted mainly the less glamorous sides of the city but with the same grandeur in style found in the works of Canaletto whom he admired. His Canal Basin from 1929 shows a scene from a busy dockyard in London suspended in stillness and dominated by an air of emptiness and abandonment. Newton also worked extensively in the countryside, especially during the war, in 1943 he painted Beck Hole, Yorkshire, which belies its pastoral imagery with a sense of sinister foreboding. The almost ethereal film noir lighting gives an edge to an otherwise everyday scene. Algernon Newton was born 23rd February 1880 in Hampstead, London. He went to Clare College, Cambridge, in 1898 but left after a year to study at Frank Calderon's School of Animal Painting and the London School of Art, Kensington. Between 1919 and 1923 Newton restructured his style and technique by studying the Old Master’s in the National Gallery. Canaletto in particular became a focus for his accuracy in conveying tonal relationships and his monochrome under painting which so convincingly rendered light in landscape. Newton began to exhibit regularly at the Royal Academy summer shows from 1923 favouring London canal and street scenes and countryside landscapes which often had a feeling of emptiness that creates a slightly unreal quality. His first one-man show was at the Leicester Galleries in 1931. 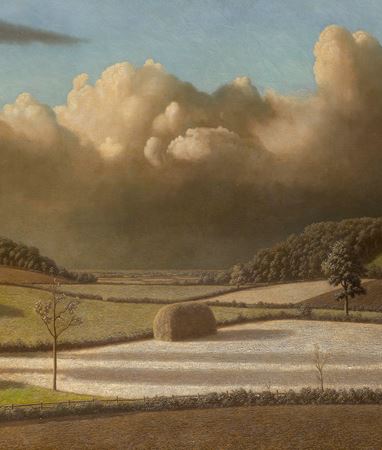