Daniel Katz has been dealing in European sculpture since 1968 and is reknowned for handling only the best. Blessed with a famously discerning ‘eye’, he blends the passion of a collector with the expertise of a connoisseur. The gallery operates from an elegant eighteenth century townhouse in the heart of London’s Mayfair. In its much admired interior are shown sculptures and works of art from the 900s to the 1900s. This year’s exhibition, which is open to everyone, spans five centuries of European sculpture and demonstrates the variery of materials and techniques the sculptors have employed through the ages. The earliest sculpture presented is a Bohemian wood sculpture of a Madonna and Child characteristic of the late Gothic period. Dating from around 1400, it is commonly known as a ‘Beautiful Madonna’ (Schöne Madonna) on account of its elegant swing and sweet features. In contrast, there will be a vigourously modelled terracotta of a battle scene by Gianfrancesco Rustici, a Florentine artist much inspired by Leonardo da Vinci’s work and whom he lived with. A charming collection of bronze statuettes by Francesco Fanelli, sculptor to the king Charles I, illustrate mythological scenes and were made in London for English collectors. A spectacular plaster by the French artist Jean Baptiste Giraud dates from 1789. The dramatic tension of the Achilles Wounded is a striking example of the heroic style favoured at the end of the 18th century. 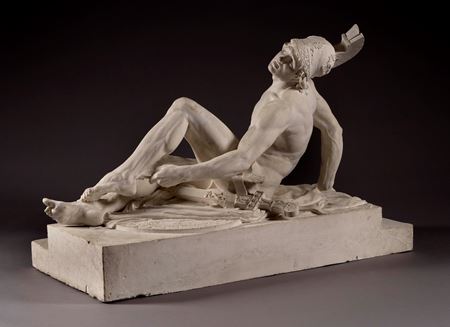