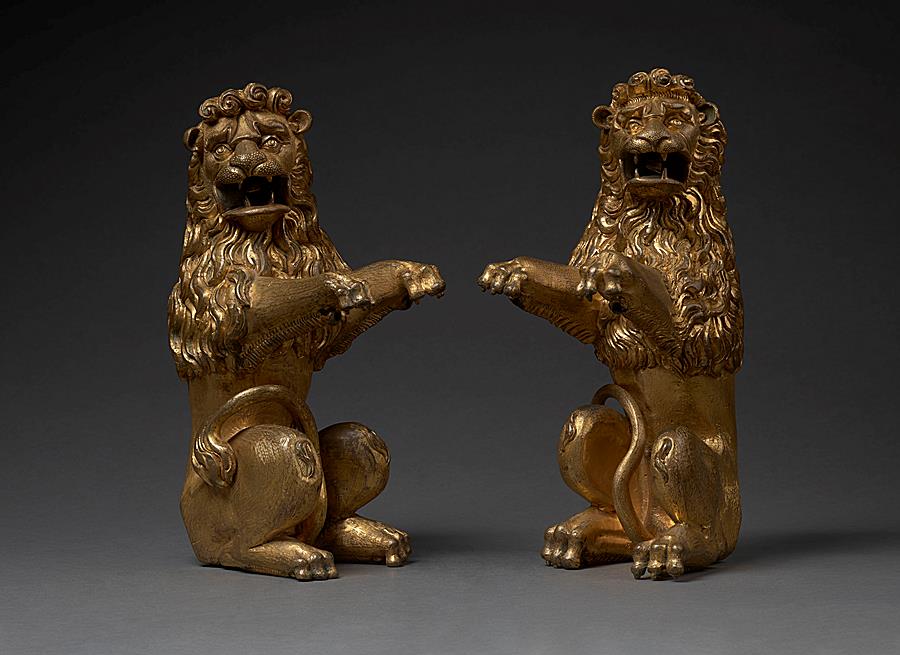 The hollow backs with their fastening loops indicate that these magnificent heraldic lions once formed part of a larger monument; as gilded figures they were most likely intended for a monument inside of a building and not for a garden ornament or as an embellishment for a statue under open sky. Their good condition also suggests a church monument or tomb rather than one of the many fountains which were the rage across Europe in the 16th century. The upright posture and the parallel position of the stretched out front paws allow the conclusion that they were used either as shield bearers or to hold up a railing surrounding the monument. Style and facture places the lions firmly within the area of South German bronze sculpture production of the second half of the 16th century. Specifically, the heavy cast and the chiselled finish with its finely stippled coat point towards an Augsburg origin. Augsburg was, after Nüremberg, the most important art centre of Germany, with a long tradition of bronze founding. Although the foundries were mainly occupied with the casting of bells and cannons; it was nevertheless not unusual that these founders were employed to cast, as a rule, rather heavy and rough fountain figures. A report of the Augsburg council of 1557 about the guild of bronze founders (Rotschmiede) however mentions that better and finer casts were normally either handed over to the local goldsmiths or directly ordered by the founders from the better equipped Nuremberg workshops. (see Jahrbuch für Münchner Geschichte, IV, 1890, p.10). The only exception was the foundry of the Labenwolf family (Urban Labenwolf and his son Marx I, Labenwolf. Further his two nephews Marx II, and Marx III.), cousins of the Nuremberg family of the same name, together with the founder Hans Reisinger, who alone were capable of casting and finishing the most delicate and difficult figures and statuettes. A number of animal bronzes can be attributed to these workshops, for example a Charging Bull in the Bayerisches Nationalmuseum, Munchen, a Monkey with viola in the Wurttembergisches Landesmuseum, Stuttgart. and a Leaping Unicorn in the Grünes Gewölbe, Dresden. All these bronzes can be identified on hand of the fine stippling representing the coat of the animals.

It is still subject to research and therefore open to speculation, whether the Labenwolfs and Reisinger supplied their own models for casting or not. It is however more than likely that they obtained the models from skilled and trained sculptors and Weihhrauch proposes tentatively two Augsburg sculptors: Paul Mayr (ca.1540-1615), a grandson of Gregor Erhard, and Jeremias Mayr (+1590?) who was married to a Maria Labenwolf (Stadtarchiv Augsburg, Pflegschaftsbuch1582/93, p.491). 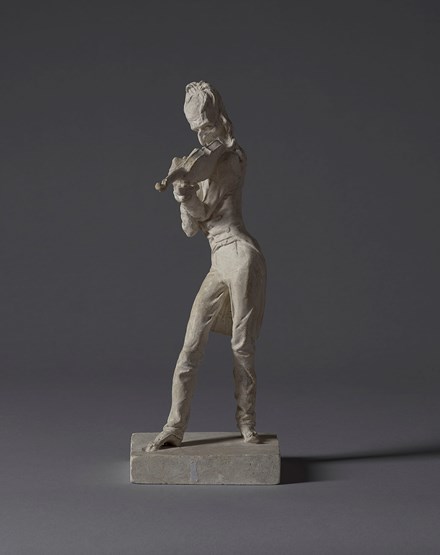 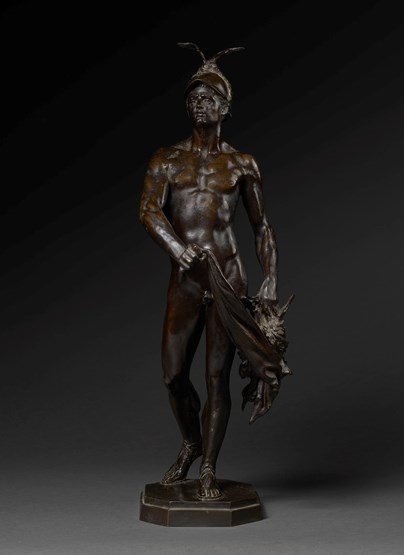