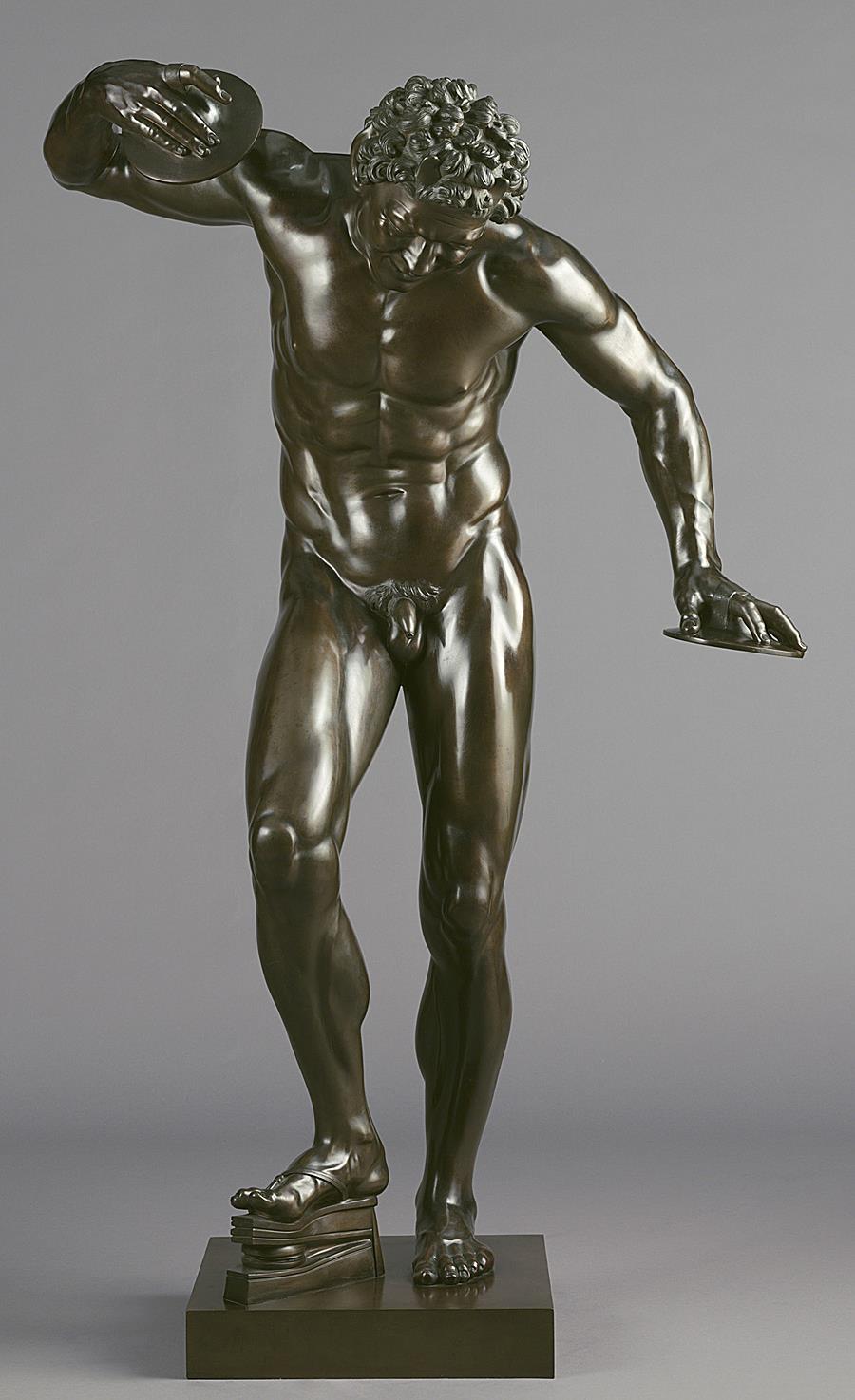 Actual-size bronze statues, after the Antique; on separately-cast, square bronze plinths
- Each statue attached to its plinth by two bronze, peg-shaped lugs through which two iron wedges have been slotted and secured

These magnificent bronze statues are actual-size casts of two of the most famous ancient marble statues in Europe, Medici Venus and Dancing faun. In 1677 Medici Venus - together with Knife grinder and Wrestlers - had been transported from the Villa Medici in Rome to Florence where they joined Dancing Faun on the second floor of the Uffizi in Cosimo III’s art gallery. By 1688 all four had been installed in the Tribuna, the 16th-century treasury. Edward Wright, George Parker’s travelling companion, eulogized:
THE VENUS OF MEDICIS … . To attempt a Description of this Miracle of Sculpture, would be to injure it: ‘Tis enough that it is the most beautiful part of the Creation represented in the most exquisitely beautiful Manner.
And he believed that the missing head of Faunus had been replaced by Michelangelo: The Statue is antique, only the Head of it, having been broken off and lost, Michael Angelo has made another to it, in such manner, as to leave little room to lament the Loss of the old one: …

The bronzes were commissioned in Florence by the Honourable George Parker (ob. 1764) on behalf of his father Sir Thomas Parker (1666-1732), recently entitled 1st Earl of Macclesfield of second creation (1721). George Parker was then on a Grand Tour accompanied by Edward Wright (ob. 1750). They had arrived in Florence by 25 October 1721, and were still there for most or all of January 1722: by 10 February 1722 they had arrived in Bologna. As Wright relates in his account of their travels published in 1730: When my Lord Parker was at Florence, and greatly delighted with these Statues, Signor Pietro Cipriani, an excellent Artist and formerly a Scholar of Soldani, and his Assistant in casting those Statues for the Duke of Marlborough, undertook to make for him Copies in Copper of the Venus and Faunus; which he engaged should at least equal Soldani’s, and be the most exact that were ever made. He had moulds of the several parts of them, and only desired that Leave might be obtained from the Great Duke for him to have Recourse to the Originals, for the more exact putting the Parts together (for want of which, Casts often differ more from the Originals, than one would easily imagine; as has happen’d particularly in most of the Casts of the Venus.) My Lord agreed with Cipriani, obtained the Great Duke’s Leave, as he desired; and Cipriani has done them and sent them to England; nor has he failed in his Engagement.

Pietro Cipriani, ‘Bronzista Fiorentino’ then in his early forties and well-established, undertook to complete the commission in eighteen months at a cost of 800 Florentine silver ducats (£215 4s 6d), 200 of which were paid in advance. This is clear from a letter dated 10 February 1722 from George Parker, by then in Bologna, -
In one of my former Letters to your Lordship I mentioned two brass statues that Mr. Wright and myself were about bespeaking and before we came from Florence we made the bargain with the man for the making of them which will come to above two hundred Pounds of which sum I have left a good Part in his hands and we have each of us (that is myself & the maker of the statues) signed a writing that they shall be done in eighteen months from the Date of the writing.
- and from a letter written in 1724 after Parker’s return to London (transcribed below as Appendix 2). The contract itself must postdate 3 January 1722 when Parker told his father: Mr Wright and I are about agreeing for a cast in Brass of two famous statues in the Grand Dukes Gallery (viz. the very/much esteem’d Venus, and a fine Faunus) having found a man, who, they say, works very well in these things, and, I believe will do them at a reasonable price.

The project took longer than expected and Parker complained about Cipriani ‘having so much exceeded his time’ in a letter dated 18 October 1724 (Appendix 2 below): however, by that date, the bronzes were ready for shipment via Livorno/Leghorn to England. Grand Duke Cosimo III had died the previous year (31 Oct 1723) and been succeeded by his son Gian Gastone.

Cipriani used extant moulds of Medici Venus and Dancing faun. Wright himself confirms this, as quoted above - ‘He had moulds of the several parts of them’. Indeed, Cosimo III had long forbidden anyone to take new moulds for fear of damaging the surfaces of the marbles. As Parker wrote to his father on 3 January 1722:
As for the moulds casts you mention’d to us in your last and other’s before, we have heard upon inquiry that the Grand Duke has resolv’d to give leave to nobody whatsoever to have new moulds made from the Statues or Busts in the Gallery, so that we endeavour to get casts from the best moulds we find ready made, and of which we have bought several Heads a List of which your Lordship receives inclosed. I think Mr Wright and I are about agreeing for a cast in Brass of two famous statues in the Grand Dukes Gallery (viz. the much/very esteem’d Venus, and a fine Faunus) having found a man, who, they say, works very well in these things, and, I believe will do them at a reasonable price.
The news was the same a few days later [letter dated 6 January 1722 (17 January in Italy)]: In my last to your Lordship I mentioned a cast in brass of the Venus and the Faunus, …; and upon their account we this day have been inquiring a second time whether it may be possible by some means or other to get leave for new moulds to be taken of the original statues, and we have had the same answer that we had formerly viz: that it is a thing entirely impossible, for that the Grand Duke refused it to the Duke of Marlborough, (who had four statues made here in brass for him) so that we must e’en be content to make use of the best of those we foun find ready made.
And Jonathan Richardson (1694-1771) had the same story to tell when he visited Florence in 1721:
Dancing Faun; a most beautiful colour’d Marble, but has been changed in two or three places by Moulding, especially the Face, which is the reason that none are allowed to be taken off now; the Duke of Marlborough’s Venus, and other Statues, were not cast off these in Moulds made express, but in old ones; the Venus has never been cast off since the Duke of Florence had it. Bianchi.

The moulds used by Cipriani were, in all likelihood, those made by Giovanni Battista Foggini’s assistants between 6 March and 5 September 1708 in order to provide the Elector Palatine in Düsseldorf (Cosimo III’s son-in-law) with plaster casts. And, given that Cipriani claims to have made the moulds from which the present bronzes were cast - formavit et fvdit -, he must have been a leading member of that team. The interlinked history of these and other actual-size replicas made by Foggini, Massimiliano Soldani Benzi and Cipriani between 1684 and 1724 is given in detail below and in Appendix 1.

However, it should be remembered that it was Soldani in 1695 who had first proposed making a bronze cast - rather than marble copy - of Michelangelo’s Bacchus, and that the Prince of Liechtenstein agreed with Soldani about the merits of bronze: the prince would order actual-size bronzes of Bacchus, Medici Venus and Dancing faun, each cast from moulds of the originals made by Soldani and his assistants.

In 1684 Foggini had been commissioned to make a mould of Dancing faun, having already completed moulds and plaster casts of Knife-grinder and Wild boar: all were sent to the French academy in Rome. Foggini used these casts to carve actual-size marbles which Louis XIV had commissioned to adorn the gardens at Versailles. Dancing faun was probably intended to be paired with Medici Venus, since permission for taking a mould of a Venus was being sought earlier that year by de la Teullière - ‘Je luy [Foggini] demanday le prix d’une copie de la Venus ou de la figure que le Roy souhaite presentement’ [Knife grinder]. Foggini also carved for Versailles a marble replica of Bacchus by Michelangelo, which is dated 1687.

In 1708, more than twenty years later, Foggini was again preparing moulds, this time for the Elector Palatine (Cosimo III’s son-in-law), to whom plaster casts were sent in 1710. Dancing faun, Medici Venus, Knife grinder and Wrestlers must have been amongst them because Soldani was permitted in 1710 to use Foggini’s moulds to cast bronzes of these four statues for the Duke of Marlborough - ‘… there having been moulds newly taken for the Elector Palatine, the Duke [of Tuscany] had consented the figures should be formed upon those moulds …’, as John Vanbrugh wrote to the duke on 28 April 1710. Edward Wright records that Pietro Cipriani had helped Soldani cast these bronzes - ‘… Signor Pietro Cipriani, an excellent artist and formerly scholar of Soldani and his assistant in casting those statues for the duke of Marlborough …’. And in 1724 Cipriani would again produce bronze casts of Dancing faun and Medici Venus, this time for 1st Earl of Macclesfield in England.

Pietro Cipriani collaborated, on at least one occasion, with Iacopo Filippini, a longtime assistant of Foggini’s: this is known from the life of Iacopo Filippini (ob. 12 December 1728 aged 60), ‘eccellente Gettatore di Metalli, e Statuario Fiorentino’, by Francesco Gabburri (Florence, 1676-1742). Gabburri relates that Filippini had worked in Foggini’s studio for many years, and he singles out for praise his work on the four bronze reliefs of St. Francis Xavier which were sent to Goa. But Filippini also made a living casting copies (‘gettò alcune Copie’) of ancient and modern statuary in Florence and in Rome. Indeed, Filippini cast a set of actual-size bronzes of Medici Venus, Dancing Faun, Knife grinder and Wrestlers under the direction of Foggini and, at another juncture (‘in altra congiuntura’), Filippini and Pietro Cipriani collaborated on another set of these four bronzes: according to Gabburri, one of these sets was commissioned by Cosimo III as a gift to Louis XIV (ob. 1715) at Versailles. Could these be the same bronzes of Dancing faun, Medici Venus, Knife grinder and Wrestlers recorded by Francesco Baldinucci as having been commissioned from Foggini by Cosimo III in 1716 (perhaps as a gift to the young Louis XV)?

After 1724, the date on the present bronzes, Cipriani continued working with Soldani, e.g. bronze candlesticks for the chapel of Fort Manoel, Malta, in 1727-1728. (Foggini died in 1725.) And in the late ‘30s/early ‘40s Cipriani was still supplying English ‘grand tourists’ with plaster casts of ancient and modern prototypes, amongst whom Sir Roger Newdigate of Arbury (1719-1806) and Sir Horace Walpole (1717-1797). Indeed, it is in a letter to Walpole - written in Florence and dated 25 May 1745 - that we first learn of Cipriani’s death, five years after Soldani’s and twenty after Foggini’s.