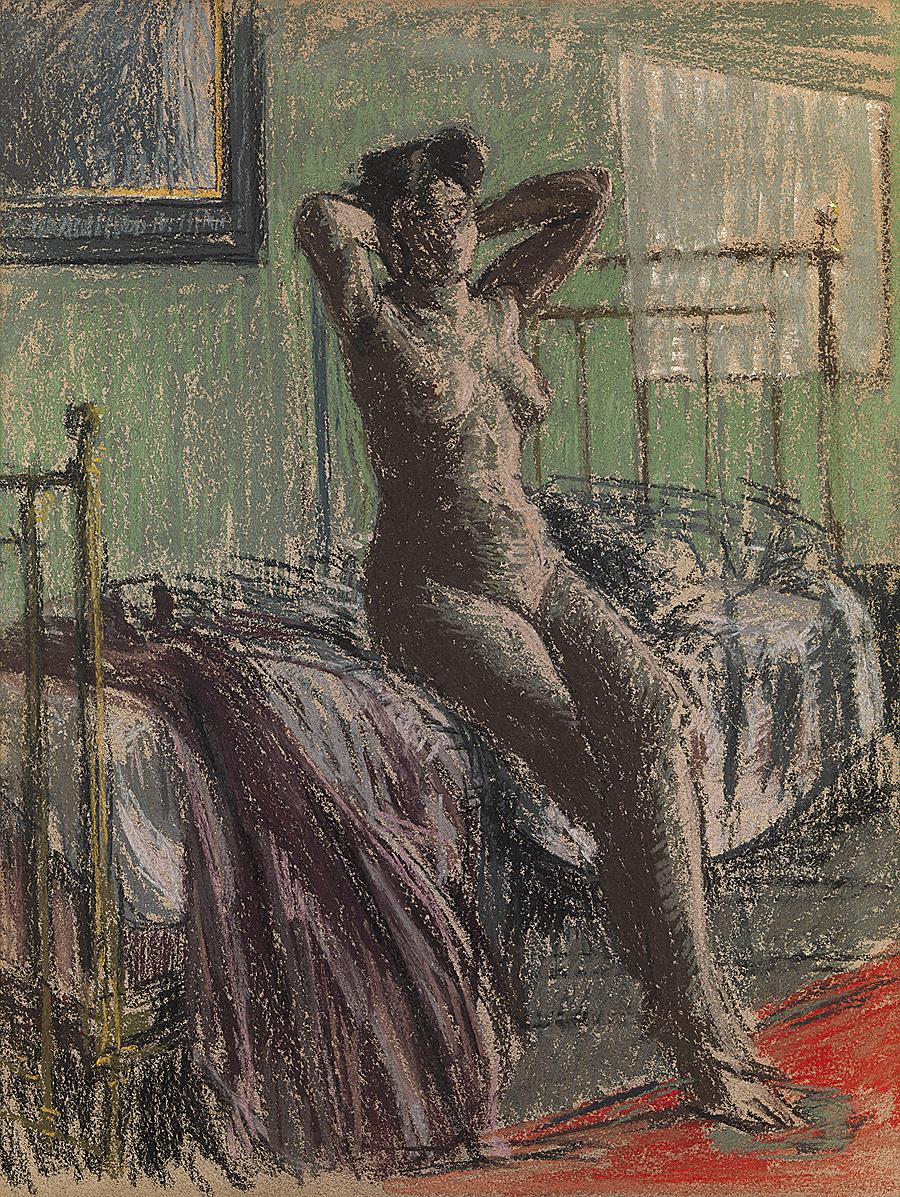 La Coiffure is a superb example of the pastels executed by Sickert between 1904 and 1907. This concentrated group of works, most of them intimate figure studies, are in no sense coloured drawings. In content, scale, and finish they are as ambitious and effective as the best of his contemporary oil paintings.

Given Sickert's long knowledge of Degas' pastels (he had been shown a selection in Degas' studio in autumn 1885 and had bought Degas' pastel Green Dancer in 1886), it is curious that he did not exploit this versatile medium at an earlier date. It could be that the characteristics of pastel offered little special attraction until, in 1903-4, Sickert developed a new subject-matter - intimate interior scenes; new methods of constructing his pictures as he sought to integrate the figures within their dingy lodging-house settings; and new ways of suggesting the impartial quality of light flickering on flesh, on drapery and furnishings. Pastel was a medium less cloggy than oil paint. He could experiment quickly and fluently and, however

energetic his hatching, achieve rich, broken effects, as well as full colour and weight, without the risk of muddying the tone, texture and definition of his picture.

The widespread use of pastel in France, and the regard in which it was held there, perhaps influenced Sickert's decision to exhibit his recent pastels in Paris rather than in London. He sent four pastels (two of them nude subjects) to the 1905 Salon d'automne, and included another four in his exhibition of paintings at Bernheim Jeune in January 1907. La Coiffure was one of the Bernheim four.

La Coiffure is not only larger than most of Sickert's contemporary oil paintings and all but one of his other pastels, it is particuarly lush in colour and handling. The triangle of vibrant vermillion in the lower right corner brings the cold harmony of greens, greys, violet and black of the main portion of the picture to life. Depth and subtlety of colour are achieved through a dense network of marks, some long and dragging, others short and stabbed, articulated by interrupted, unevenly weighted black lines of drawing.

Were the title not inscribed on the board which Sickert used as a backing to his pastel-laden paper, it would have been impossible to establish that this representation of a nude seated on a handsome brass bedstead is the pastel exhibited as La Coiffure in the 1907 exhibition. It might just as well borne the title Le Grand Lit, another of his pastels at Bernheim. While the model's slightly coy glance at the spectator and the way she shows off her figure by lifting her arms behind her head suggest she is pleased with her appearance, her upswept hairstyle is by no means the central motif. A clue to the quixotic title may be found by comparing the pastel with a contemporary and closely related oil painting (Nude Stretching, fig. 1, bought at Agnews in 1960 for presentation to Mr Herbert, retiring Chairman of the Danish Bacon Company, but now of unknown whereabouts). The setting, Sickert's studio at 8 Fitzroy Street, is the same; the model is again seated on a bed, stretching her back and shoulders with arms raised behind her head. The chief differences are that in the oil the bedstead is iron, not brass; the model's straight hair is scraped tightly back with no bouffant loops over her forehead as in the pastel; and the lilac gown draped across the bed in the pastel in missing in the oil where we see only crumpled sheets. These two pictures afford a classic example of how Sickert produced variations on a theme by adopting the role of theatre director. He treated the lodging-house rooms in which he painted as stage sets, shifting the props and making minute adjustments to the poses (and in this case the hairstyle) of his models. With each change the atmosphere as well as the narrative of his pictures were subtly modified. Thus we may interpret the pastel as representing a confident beauty who can afford her hair to be dressed, whereas the oil suggests we are spying on a cheap harlot. 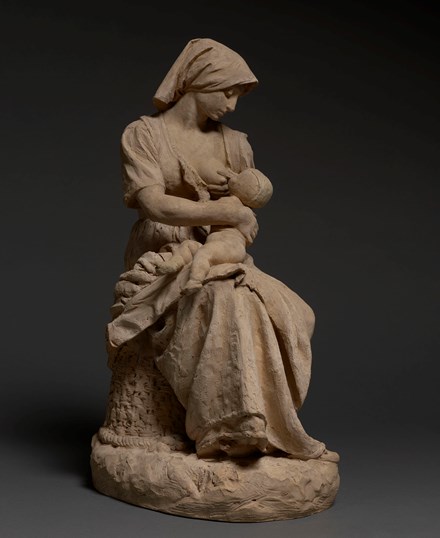 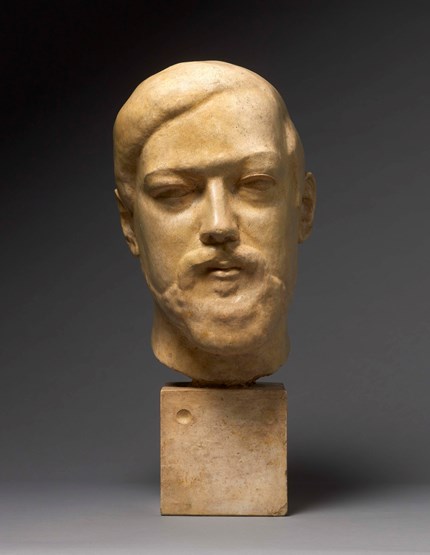