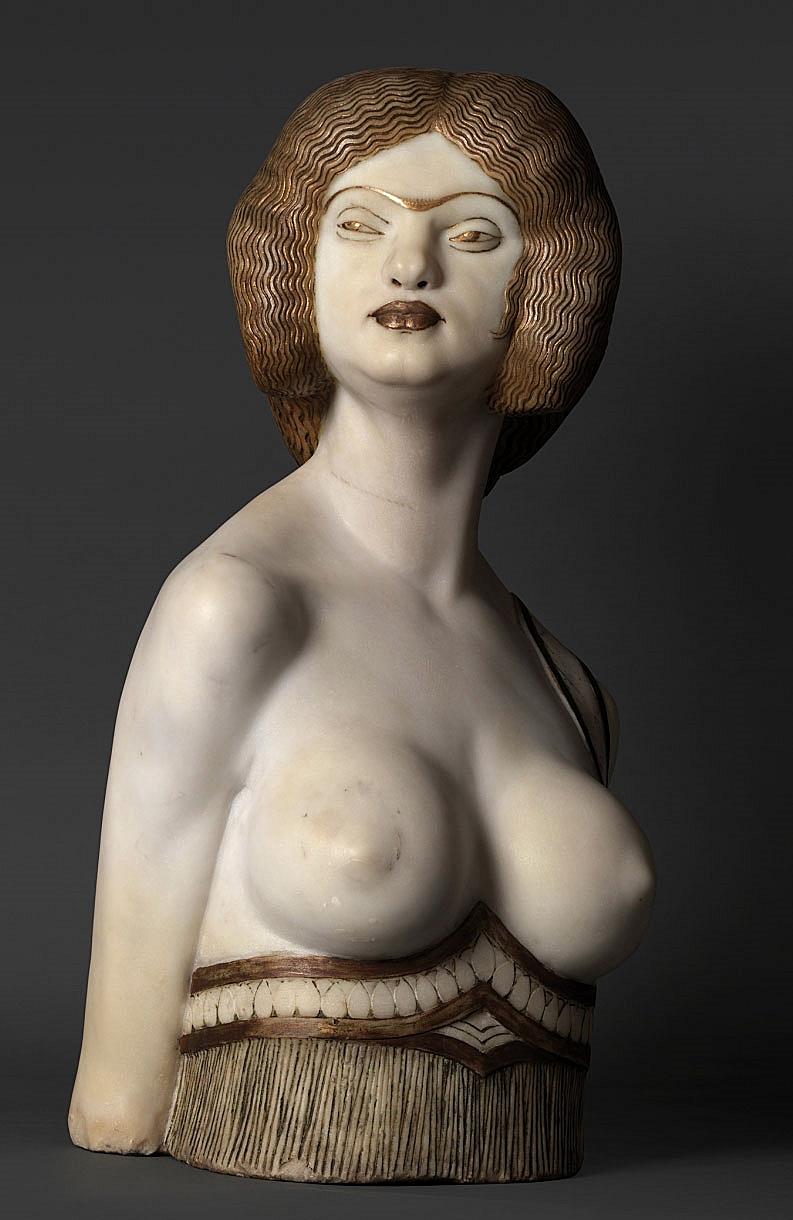 Salomé, inspirer of male fantasies and recognised both literarily and artistically as the epitome of the femme fatale has long preoccupied artists. In Elsa Kalmár’s candid rendering of Salomé’s bust she tilts her chin up and her head back, as though in defiance of someone or something. Her facial features, which appear through parted, wavy hair are heavily accentuated by make-up. Her lips bulge, and her stylised eyebrows are furrowed above large eyes; which stare intently down at an imagined person somewhere over her right shoulder. Although bare breasted, she is not the traditional, self-conscious or delicate classicized beauty one might expect - as so often used to portray female figures such as Salomé. Instead, she appears confrontational, and therefore repulsive rather than alluring.

It is a vision of a modern age – where Salomé takes the form of a modern beauty; one which may be found in the bars or the streets of any urban metropolis. Indeed, one whose true ‘beauty’ may even be questioned - as Kalmár has so brilliantly realised here - leaving the viewer to ponder whether her imaginary object of desire is actually John the Baptist, or instead, someone equally as modern as herself.

The sculptor, painter, lithographer and painter Elsa von Kalmár was born on January 1, 1876 in Vienna as the daughter of Vice Admiral Alexander von Kalmár. The frenetic life of her early years in many ways reflecting her feverish ascent as an artist. Kalmár initially studied in Vienna and Munich, originally working as a painter in Dachau, before turning to sculpture in 1896 becoming a student of Hermann Hahn in Munich. Particularly formative was a study trip to Paris in 1900, where she saw a large Rodin exhibition, the work of the great master leaving a lasting impression on her and her practice.
k
If Paris was the catalyst for her practice it was Florence that shaped it. In 1901 she spent six months there absorbing the Renaissance art of the Florentine school. Her first works were small sculptures and craft items, but she soon progressed into the field of large sculpture and portraiture. She found early success in 1900 with a bust of the famous actor Josef Kainz, which is now erected in the Vienna Burgtheater. From 1902 to 1903 and again from 1905 to 1909, the artist lived in Florence. Between 1909 and 1912 she stayed in Vienna and then in Paris until 1914 and the outbreak of First World War. During the fighting she worked as a nurse in Albania and Montenegro for more than two years and afterward, after a short stay in Salzburg, she settled for the remainder of her life in Budapest until her death on 3 September 1956.

Kalmar was a strong willed and determined young artist, already exhibiting in the Vienna Secession in 1899 whilst still studying in Munich, where she presented a small bronze sculpture of an African woman with a shell; whose simple and natural form was highly commended by the press. She would go on to exhibit several more times at the Secession in the 8th (1900), 10th (1901) 17th (1903) and 22nd (1905) issues. Concurrently to this exposure she also exhibited as part of the Hagebund group of artists who, like the Secessionists, inherently opposed the establishment. Her early success meant that she found herself not only one of the foremost artists in Austria-Hungary, but also one of the leading female artists of the early twentieth century.

In recognition of her achievements Köveshazi-Kalmár (as she was known after 1906) was, from 1907, a member of the artists' association "Kéve", from 1925 a member of the ‘Association of intellectual artists’ and from 1926, a member of the ‘Neue Künstlervereinigung’, furthermore, in 1928 she was elected ‘Corresponding Foreign Member of the Artists' Association’, Hagen. After the First World War, Elsa Kalmár’s success continued to grow and she participated in exhibitions worldwide including Oslo in 1923, Vienna in 1924, Fiume and Florence in 1927, Geneva 1929, and Washington in 1930. Nonetheless for all her fame, she was not largely prolific, and her sculptures remain relatively rare.

Her first collective exhibition was in 1904 at the influential Galerie Miethke, Vienna, epicentre of the modernist art movement in Austria. Her works received considerable praise, with a eulogizing "Neue Freie Presse" writing:

“The exhibition receives a very valuable addition in the form of sculptural works by the young Viennese sculptor Elsa v. Kalmár. It is true that most of these works have been gradually seen in the secession, but now, when they are together, complemented by the newest, they stun by the personal impression they make. This young artist is full of talent right down to her fingertips! At the same time, she has naïve unconcerned youth. What boldness… But even the daring seems permissible because it is justified by her artistic feeling. But this artistic feeling is really plastic. Elsa v. Kalmár 'thinks' in bronze and marble. It calculates the finest, or instinctively finds, the most favourable effect of plastic surfaces in the playing light. As a result, her creations have so much life….
Anyway, after this exhibition you will be far more serious with Miss v. Kalmár’s work than previously expected. "

A masterpiece of the artist’s oeuvre, Salomé was executed three years after her first show and marks an important point in her career. The subject, long popular with artists (and testified to by the fact Kalmár had already explored the notion of Salomé in a small bronze statuette of 1903) may well have gained impetus as a result of the 1907 premier in Vienna of Richard Strauss’ operatic adaptation of Oscar Wilde’s 1896 drama Salomé. The work received great praise, particularly for its ability to marry a traditional subject matter with an original and avant-garde approach.

Salomé was first shown alongside other works by Kalmár and alongside paintings by Franz Olgyay (1872-1939) at the Salon of Könyves Kálmán in Budapest in December 1909. Her works were received with great acclaim, one contemporaneous article highlighting Kalmár’s works for their ‘amazing power and technical skill’ which ‘refutes the notion that women have no talent for sculpture’ and though at least enough of Kalmár’s works were shown ‘to affirm a favorable opinion of her’ if anything there were ‘too few’.[1] Salomé was singled out for its “budding figure, fiery expression and the superb contrast between the sensual and gilded lips and eyes which stand out from the purity of the white marble.”

Salomé’s exhibition in Budapest was almost immediately followed by its display the following spring in 1910, in Vienna as part of the Hagenbund Group spring exhibition. Again, it received further acclaim, with the Jewish People’s Voice writing of her as an ‘outstanding Jewish artist’ and one of the ‘first sculptors in Hungary’ - fine praise indeed for a female artist of this time. The influential English magazine The Studio also singled out Salomé for being ‘worthy of all praise’. Further reporting in the Vienna Journal of March that year highlighted the success of the work as being greatly inventive and that, whilst undoubtedly somewhat challenging in its ‘grotesque execution’, it was ultimately successful in its ability to reconcile this with ‘the original idea’ of Salomé. Additionally, the journal stressed Salomé’s importance in acquiescing the public opinion of the avant-garde, by auspiciously observing in relation to the sculpture:

… let's just say it quietly: we've been annoyed about the secessionist furniture until we filled our salons with it, have censured the grotesque architecture until we no longer like other lines and the youth struggles on, on the wild paths of their own ideas and boundless art arbitrariness, until we have caught up with them... " 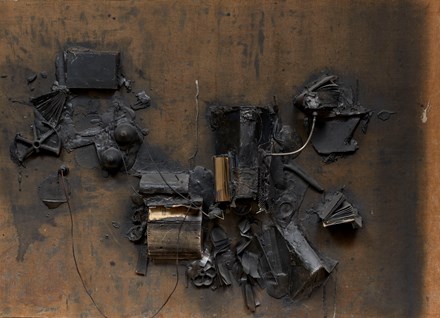 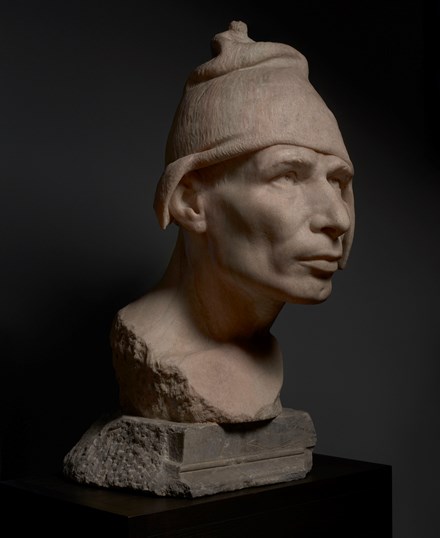 Head of a Carter 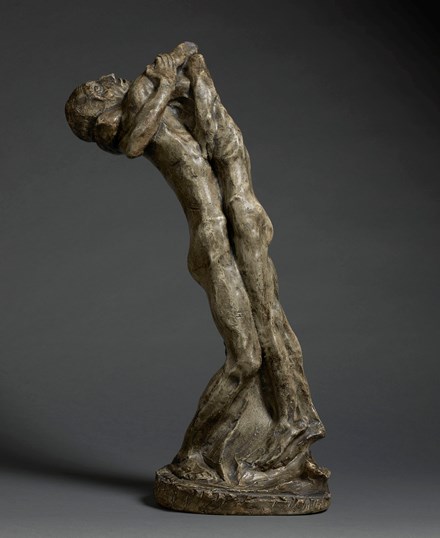