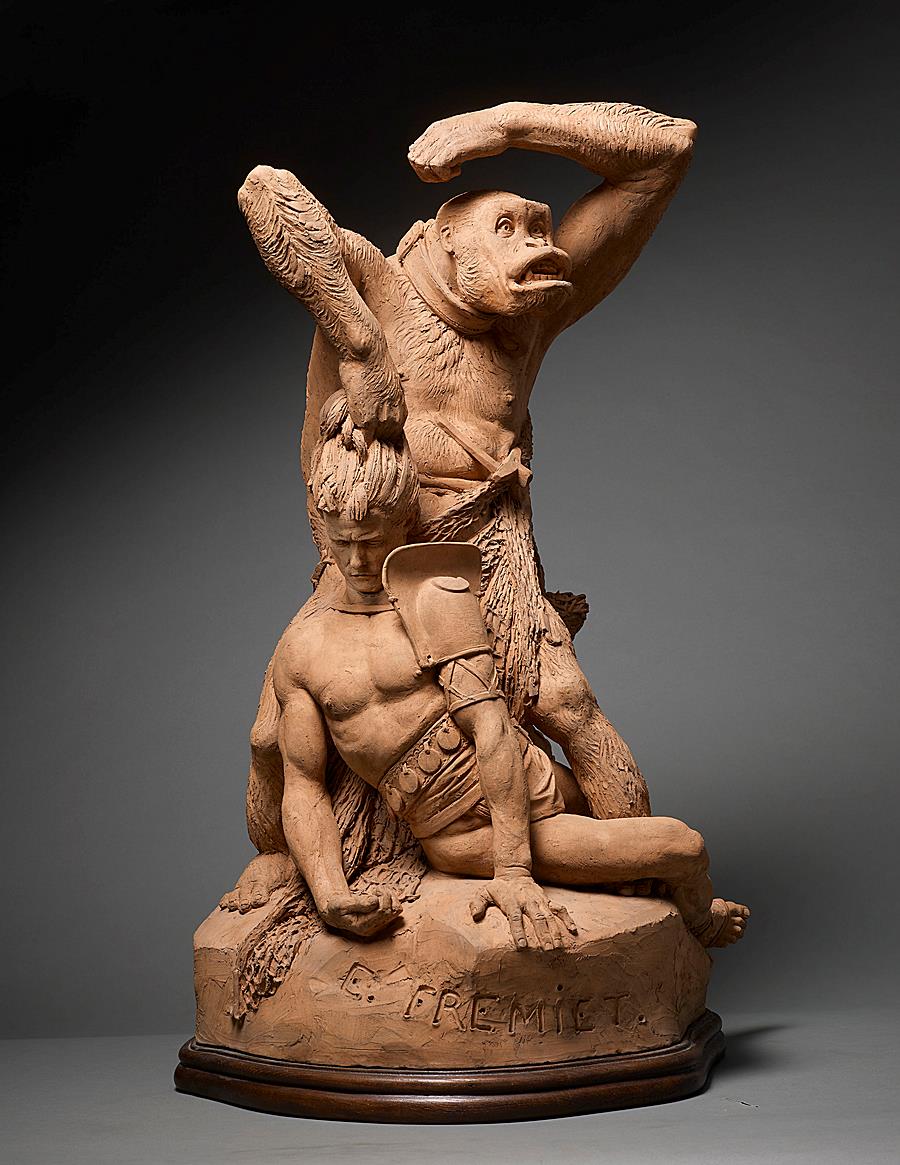 Fremiet trained in the studio of the sculptor François Rude, who was his uncle. Rude’s emphasis on the study of natural subjects suited the young sculptor who had worked with the painter and naturalist Jean-Charles Werner (1798-1856) at the Musée National d’Histoire Naturelle in Paris. Through his studies from nature in the Jardin des Plantes in Paris, Fremiet made himself thoroughly acquainted with the anatomy of wild animals and he made his Salon début in 1843 with a plaster statuette of a Gazelle. Animal statuettes in bronze formed the bulk of his early commercial output and a catalog from about 1860 lists 68 works of that type[1]. Fremiet maintained an interest in natural history throughout his career and his position as leading national animalier sculptor was confirmed when, in 1875, he succeeded Antoine-Louis Barye as professor of zoological drawing at the Musée National d’Histoire Naturelle. Frémiet was also a pioneer, making life-size sculptures of animals and exploring the relationship between man and the animal world, at a time when Darwinism and anthropology became prominent.

Over the years, Frémiet realised a number of mixed groups featuring animals and humans. In 1859, the same year Darwin published his Origin of the Species, Frémiet’s ferocious sculpture of a Female gorilla carrying off a Negress created a scandal and was rejected by the jury of the Salon (plaster, destroyed[2]). The artist, however, continued to create compositions in the same vein and realised a Gorilla abducting the Venus of Milo (ca. 1871, location unknown) and in 1887 his Gorilla - Gorilla Troglodyte from Gabon (plaster, Musée des Beaux Arts de Nantes) would not only be accepted at the Salon but also received a medal. In fact, for this plaster Frémiet was awarded the highest distinction given at the Salon. Afterwards the artist made a number of bronze reductions of this composition, as well as a life-size cast that was exhibited at the Universal Exhibition of 1900 (Robert Allerton Park, USA). He continued with works in the same vein, for example his relief of Orang-utan and the savage from Borneo (painted plaster, Musée des Beaux-Arts, Dijon and enamelled stoneware, location unknown) is another remarkable example of the artist’s powerful realism[3].

The present terracotta was exhibited at the Salon in 1876 under the title Rétiaire and gorilla [Retiarus and gorilla] and was thought to have been lost until its recent rediscovery. A retiarus was a Roman gladiator who fought with equipment styled on that of a fisherman; it included a weighted net (rete, hence the name) and a shoulder guard, both visible on the terracotta. Fremiet’s highly precise sense of observation, as well as his realistic rendering of the animal’s thick and rough fur, are remarkable. A terracotta sketch for the present sculpture is in the collection of the Musée d’Orsay, Paris. It is of a smaller size (24 cm high) but features the same composition, with the gladiator being grabbed by his hair by a fierce gorilla standing above him. No bronze version of this composition is known.

In the years 1885-1890, placing the same emphasis on the animal shown standing and triumphant, Frémiet modelled a group representing a retiarus struggling against a bear. The artist’s interest for Roman gladiators recalls that of the painter Gérôme for the depictions of combats in arena.